House Democrats have sent the impeachment charge of “incitement of insurrection” to the Senate, kicking off the trial process.

WASHINGTON – When President Donald Trump faced an impeachment trial a year ago over his actions related to Ukraine, he lined up a star-studded team of attorneys led by White House counsel Pat Cipollone.

Ken Starr, who headed the investigation into President Bill Clinton that led to his impeachment, and Alan Dershowitz, a constitutional law expert who defended O.J. Simpson, were among the lawyers on Trump’s team. The case centered on whether Trump abused the power of his office to pressure Ukrainian officials to investigate his political rival, now-President Joe Biden.

For Trump’s second impeachment trial, over accusations that he incited a Capitol Hill riot Jan. 6 that left five people dead, he hired Butch Bowers of South Carolina, a prominent attorney in conservative circles who made his name defending Republican governors in the state but who is untested on such a high-profile political case.

This trial will look dramatically different. Trump is no longer president and thus may have less sway over a heavily divided Republican conference. He doesn’t have a full legal team in place, and his defense strategy is not clear.

The sole article of impeachment passed by the House, which charges Trump with “incitement of insurrection,” was sent to the Senate on Monday, setting the stage for a trial that is likely to begin in earnest the week of Feb. 8.

More: The second Trump impeachment trial is set for February. What happens next? 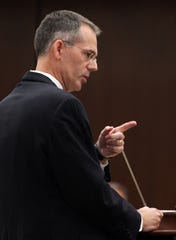 Bowers worked for the Justice Department during President George W. Bush’s administration, but he’s better known for his government work in South Carolina. He served as counsel to Republican Govs. Nikki Haley and Mark Sanford and did a stint as chairman of South Carolina’s election commission. His represented Sanford through a failed impeachment effort that eventually morphed into an ethics probe.

Bowers will lead Trump’s defense team; other attorneys have yet to be announced. The slow pace in Trump corralling a legal team has become a flash point, and some Republicans noted there is a hesitancy to defend Trump across the party.

“It’s much easier for a sitting president to find aides than a former president,” said Alex Conant, a GOP strategist who worked for Sen. Marco Rubio’s 2016 presidential campaign. “I think everything about this case, especially how politically toxic Trump is with a lot of people, means there’s not a lot to be gained by representing Trump right now.”

Bowers has yet to speak publicly about the case, only speaking once with the South Carolina Post and Courier to say he looks “forward to representing the former president.”

Trump’s legal team is likely to use the argument in an attempt to dismiss the case. Though the Senate has ruled cases of former officials could be heard before the chamber, senators in the late 1700s voted against hearing the trial of former Sen. William Blount and decided it did not have jurisdiction to hear the case because Blount had been expelled.

Some Republican allies have brushed aside Trump’s conduct, arguing a speech he gave outside the White House to protesters who later stormed the Capitol was not inciting an insurrection but rather just him complaining about the handling of the election.

It’s unclear whether Trump’s team will use the trial as a forum to argue the list of voter fraud claims that his campaign failed to prove in dozens of court cases.

Trump impeachment: is impeachment after term is over a possibility? What’s the precedent? Your impeachment questions, answered on States of America.

“Anything is possible with Trump. I just don’t think that Republican senators are going to be sympathetic to the fraud claims,” Conant said. “That isn’t going to help his standing in the Senate. I’m honestly curious what Trump does here.”

Trump’s allies, including members of the House Freedom Caucus, who argue the impeaching case is unconstitutional point to text in the Constitution that applies only to current public servants, not those who no longer serve.

Sen. Rand Paul, R-Ky., vowed to object to the trial being held and would force the Senate to vote on the matter, calling it an “unconstitutional sham” and said the chamber would be holding a “trial of a private citizen.”

The central issue is the text of the Constitution, which says impeachment applies to presidents, vice presidents and other “civil officers.” It doesn’t delve into former presidents or holding an official who left office accountable for conduct committed while in office.

The path to convicting Trump is an uphill one, though the political climate has shifted since his last impeachment trial.

Last year as the Senate heard Trump’s impeachment case, Republicans stood united. Every House Republican voted against impeachment, and a few Democrats joined them. Members of the House Republican conference were tapped as part of his impeachment defense, going on cable news frequently and arguing the case for his acquittal daily to reporters on Capitol Hill.

Helping to keep the conference united, Trump allowed Republicans to use Camp David for retreats, hosted movie nights at the White House, invited lawmakers to the World Series and even signed a Trump board game for one legislator.

This time, Trump won’t be able to offer those perks in hopes of preventing defectors.

Republicans are divided. Some of Trump’s former allies on Capitol Hill have become some of the leading voices against him. Ten House Republicans joined Democrats in voting to impeach him.

More: The 10 Republicans who voted to impeach Donald Trump: ‘There has never been a greater betrayal by a president’

The attack at the U.S. Capitol marked the Republican Party’s biggest break with Trump since he took office. Some of his closest allies have left open the possibility of convicting him at his trial, including Kentucky Sen. Mitch McConnell, the top Republican in the chamber.

Trump’s defense on Capitol Hill appears to be a more scattered effort than the one last year that was formally concocted by the president and his team, though Sen. Lindsey Graham, R-S.C., has emerged as a key adviser, acting as a middle-man between Trump and Senate Republicans. Graham also played a role in connecting Trump with Bowers.

Some of the president’s most ardent defenders in Congress are facing controversies of their own over the role they played before the riot at the Capitol, including calls for them to resign and requests these members to face penalties.

Before Trump left office last week, several moderate Republicans made searing remarks about him. Some even called for him to resign or for the 25th Amendment to be invoked to remove him before he left office.

The change in attitude toward Trump doesn’t mean he will be convicted. It would take 17 Republicans to vote with the entire Senate Democratic caucus.

And while some Republicans have fiercely condemned the former president, many could shy away from convicting him due to questions over the Constitutional standing of the case.

“A lot of Republicans could issue some really harsh comments about Trump followed by a big ‘but’ and outline the issues with the Constitution,” said Doug Heye, a GOP strategist. “They have an out here, potentially.”

All eyes are on McConnell – who worked hand-in-hand with the White House last year to ensure Trump’s acquittal but is now open to convicting him.

Some Republicans on Capitol Hill believe if McConnell votes to convict, it could open the floodgates and offer political cover for more lawmakers to do the same.

USA TODAY’s Christal Hayes shows what it look like inside the U.S. Capitol after pro-Trump rioters who had stormed the historic building were cleared.