The number of migrant families seeking to cross the southwest U.S. border has surged to levels seen prior to the pandemic. That’s presenting a challenge for President Joe Biden. The surge began in the final months of the Trump administration. (March 11)

“This is a humanitarian challenge to all of us,”the speaker said on ABC News’ “This Week.” Pelosi said President Joe Biden had “inherited is a broken system at the border” and that his administration was “working to correct that in the children’s interest.”

After the interview, she told reporters “this is a humanitarian crisis,” a label the Biden administration has avoided using.

The speaker’s comments come as thousands of unaccompanied migrant children are being held in detention facilities in the U.S. while they await processing by the United States Citizenship and Immigration Services and Department of Homeland Security. 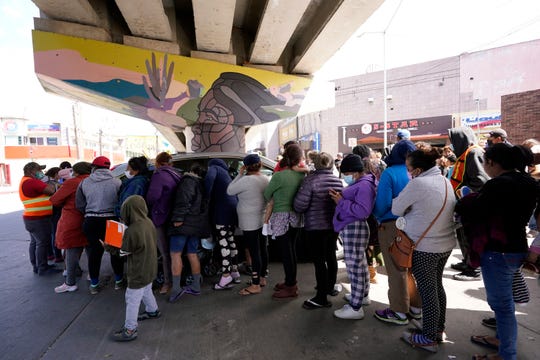 People surround a car as it arrives carrying food donations at a makeshift camp for migrants seeking asylum in the United States at the border crossing Friday, March 12, 2021, in Tijuana, Mexico. The Biden administration hopes to relieve the strain of thousands of unaccompanied children coming to the southern border by terminating a 2018 Trump-era order that discouraged potential family sponsors from coming forward to house the children. (Photo: Gregory Bull, AP)

The children, largely fleeing instability in their Central American home countries, come as a major test of Biden’s promise that his administration would adopt a “more humane” approach to undocumented immigrants and those seeking asylum in the U.S.

There are currently over 3,000 children being detained at the border, a situation White House press secretary Jen Psaki called “heartbreaking.” Data obtained by CNN found that the number of unaccompanied children arriving daily at the border had risen to 435, up from a previous average of around 340.

To manage the surge of new arrivals, the Biden administration has called on the Federal Emergency Management Agency to provide logistics and aid to help with the situation.

“I’m so pleased that the president, as a temporary measure, has sent FEMA to the border in order to help facilitate the children,” Pelosi said, adding the process ultimately brings children to locations “where they are cared for as they are transferred into family homes or homes that are safe for them to be.”

The overwhelming majority of migrants currently attempting to cross the border are turned away. When unaccompanied migrant children, however, are found crossing into the country, the administration has opted to provide shelter and protection for the youth. The move is a reversal of Trump era policy whereby minors were required to wait in Mexico despite having the right to seek protection under federal law.

The White House has said it has adopted a “more humane” approach to the situation than that taken by the Trump administration, which adopted an aggressive deportation and detention strategy critics attacked as unnecessarily cruel,particularly the “zero tolerance” policy that made no exemptions for asylum seekers or adults traveling with minors.

Yet, in the current wave of migrants, many children are being detained in facilities run by Customs and Border Protection that are not equipped to house people for extended periods of time. Health and Human Services facilities that fulfill that function currently have little capacity to take on more people, and migrant children are being apprehended faster than HHS can release them to parents or sponsors.

“I am grateful for the exceptional talent and responsiveness of the FEMA team,” DHS Secretary Alejandro Mayorkas said in a statement Saturday evening. “I am incredibly proud of the agents of the Border Patrol, who have been working around the clock in difficult circumstances to take care of children temporarily in our care. Yet, as I have said many times, a Border Patrol facility is no place for a child.”

“Our goal is to ensure that unaccompanied children are transferred to HHS as quickly as possible, consistent with legal requirements and in the best interest of the children,” the secretary said.

Rep. Alexandria Ocasio-Cortez condemned the opening of additional facilities to house migrant children on the border as “not okay, never has been okay, never will be okay.”

This is not okay, never has been okay, never will be okay – no matter the administration or party. https://t.co/AEV7s7QQnB

Republicans have also seized on the issue as a chance to critique Biden’s broader immigration policy. House Minority Leader Kevin McCarthy, R-Calif., is leading a delegation of GOP lawmakers to the border to survey the situation.

“I feel compelled to express great concern with the manner in which your administration is approaching this crisis, butwith hope that we can work together to solve it,” McCarthy wrote in a letter to Biden.

Debates over the magnitude of the current wave of unaccompanied minors are also dividing lawmakers in Washington. Similar surges in migrants attempting to cross the border occurred in 2014 under President Barack Obama, and in 2018 and 2019 under President Donald Trump.

Democrats argue the current surge and consequent delays in processing are the results of Trump administration policies, while Republicans argue the situation is of Biden’s own making.

Sen. Bill Cassidy, R-La., told “Fox News Sunday” the current surge was “entirely” Biden’s fault. “You can’t help but notice that the administration changes and there is a surge,” the senator contended.

But Rep. Veronica Escobar, D-Texas, said “the flow of humanity arriving at our front door never stopped,” during an interview with CNN’s “State of the Union” on Sunday.

“The Donald Trump administration didn’t stop them, and what we are seeing today is the consequence of four years of dismantling every system in place to address this with humanity and compassion,” the representative argued.

When pressed about why she and other Democrats were willing to call the situation in 2019 a crisis, but not the current migrant flow, Escobar contended that her use of the word crisis at the time referred to “the government’s response that created the inhumane conditions where we had families and small children outdoors in triple-digit temperatures sleeping on rocks. That was truly a humanitarian crisis,” she said.

The representative described the current situation on the border as “an enormous challenge” and “unacceptable.”

The White House recently proposed an immigration reform package, which would overhaul the existing system by offering undocumented immigrants a pathway to citizenship, reforming legal immigration requirements and modernizing border security with new technology, among other provisions.

And House Democrats  plan to move forward this week with two immigration bills that are separate from Biden’s plan: the American Dream and Promise Act and the Farm Workforce Modernization Act.