President Joe Biden denotes the significance of unity during America’s trying historical past.

WASHINGTON – Moderate lawmakers, many of whom played a pivotal role in brokering a bipartisan compromise during the last round of coronavirus relief negotiations, are again taking on a prominent role as President Joe Biden’s administration attempts to pass an ambitious legislative agenda in its first few weeks.

Biden has proposed a $1.9 trillion COVID-19 relief plan and several other significant proposals on immigration and infrastructure spending that will require congressional approval. But in a Senate split 50-50 between both parties, with Vice President Kamala Harris the tie-breaking vote, Democrats will need Republican votes in order to pass any major proposals. At least ten Republican votes are needed to break a filibuster and advance any legislation, assuming all Democrats vote for the legislation.

In light of this potential gridlock, a bipartisan group of 16 moderate senators and two House lawmakers have been invited to meet by phone on Sunday with National Economic Council Director Brian Deese for what he described Friday as a session to “make the case” for more relief and to hear lawmakers’ concerns. 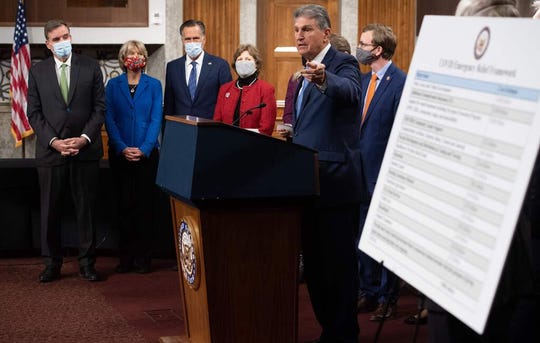 Sen. Joe Manchin, D-W.Va., and a bipartisan group of lawmakers announce a proposal for a COVID-19 relief in Washington on Dec. 1. (Photo: SAUL LOEB, AFP via Getty Images)

The group invited to the call includes key senators like Joe Manchin, D-W.V.; Angus King, I-Maine; Susan Collins, R-Maine; and Mitt Romney, R-Utah. King and Romney confirmed the call. Two House members were also invited: Reps. Josh Gottheimer, D-N.J., and Tom Reed, R-N.Y., according to two sources familiar with the conversation but not authorized to speak on the record. The two lawmakers co-chair the bipartisan Problem Solvers Caucus in the House.

The group of senators helped break through the impasse in months of negotiations between former President Donald Trump’s administration and Congress last year as they met for dinner and started to broker a compromise, eventually bringing in Reed, Gottheimer, and the members of their group over countless Zoom chats. Since then, the groups have bolstered their numbers. The bipartisan Senate group has swelled to 16 senators, and the Problem Solvers Caucus added 16 new House members for a total of 56 total members evenly divided between Republicans and Democrats.

More: Stimulus checks and taxes: What you need to know before filing your 2020 income tax returns

Senate leaders voice outrage after reports that hundreds of Guard troops were forced out of areas of the Capitol they had been using for rest breaks and were relocated to a nearby garage. (Jan. 22)

Deese, who is charged with shaping Biden’s economic policy agenda as NEC director, will have to sell Biden’s ambitious plan to some of the Republicans who’ve groused over its hefty price tag.

When asked what his message was for those reluctant Republicans, Deese told reporters Friday: “In terms of the message, it is pretty clear, we’re at a precarious moment for the virus and the economy. Without decisive action, we risk falling into a serious economic hole.”

The uphill climb is not unfamiliar to Deese, who played a key role in the 2009 U.S. auto industry bailout and helped negotiate the Paris Climate accords under former President Barack Obama

The administration has lowered the stakes by tapping Deese, a lower-profile official who is tasked with simply making the case rather than closing a deal with lawmakers, unlike Biden or Harris.

More: ‘Failure is not an option’: Biden faces pressure to deliver in ‘wartime’ effort against COVID-19 crisis

“He’s not seen as a partisan person, he’s just a smart policy guy,” a former senior Obama White House official who spoke on the condition of anonymity said of Deese. “You’ve invested no political capital if that doesn’t go well. You get the upside of saying you met with them but if nothing happens, nobody’s disrespected.”

Deese, for his part, told reporters at a White House briefing Friday that the president had directed him and others within the administration to handle outreach to Congress, business and labor organizations as well as mayors and governors. He also said other members of the Biden administration would be on the call.

The lawmakers are sure to raise concerns about the cost of Biden’s proposal, even though a bill has not been introduced yet.

Collins told reporters Friday her “number one question” on Sunday would be the “overall size” of the package. She and other Republican senators have argued that they might be rushing too quickly into passing another mammoth package after passing a $900 billion package in December.

Romney expressed a similar concern, telling reporters he was concerned whether the overall price tag of the package “based upon need, as opposed to simply looking for more stimulus.”

Sen. Todd Young, R-Ind., another one of the senators invited to the call, told reporters Biden’s plan was a “nonstarter” in its current form, but added, “it’s something that we will scrutinize and in hopefully find some common ground.”

Young said he liked some individual components of the proposal like its provisions on vaccine distribution and development.

But the meeting signals the Biden administration is following through on the president’s campaign promise to prioritize bipartisanship and Deese’s ability to attract a number of moderate lawmakers shows Republicans are open to it, too.

The difference between now and last time lawmakers hashed out a deal is that Republicans can negotiate without the fear of last-minute Trump tweets upending talks, and Senate Majority Leader Chuck Schumer – not Mitch McConnell – will make the call on bringing the bill to a vote.