Slain U.S. Capitol Police Officer Brian Sicknick lay in honor in the U.S. Capitol, allowing colleagues and the lawmakers he protected to pay their respects and to remember the violent attack on Congress that took his life. (Feb. 3)

House Speaker Nancy Pelosi, D-Calif., praised the 42-year-old officer as a “hero” for his efforts Jan. 6 to stop a pro-Trump mob that stormed the Capitol trying to stop the congressional counting of Electoral College votes for then-President-elect Joe Biden. 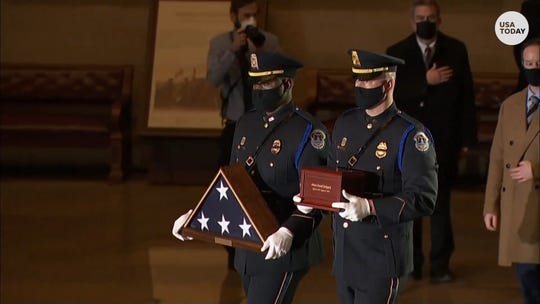 Sicknick joins two other Capitol Police Officers who received the honor after dying in theline of duty: Officer Jacob J. Chestnut, Jr., and Detective John M. Gibson, who were fatally shot in 1998 when an armed intruder got past a security checkpoint at the Capitol.

“The courage of these heroes brings honor, brings luster to our Constitution and to our democracy,” Pelosi said, referring to the three officers.

More: What to know about Capitol Police officer Brian Sicknick, who died from injuries after pro-Trump riot

Senate Majority Leader Chuck Schumer, D-N.Y., called Sicknick “a peacekeeper who loved his dogs and his girlfriend Sandra (Garza), and his family, and the New Jersey Devils. He was caught in the wrong place at the wrong time. And it did on a day when peace was shattered.”

“That Brian and his family were made to pay such a high price for his devoted service in the Capitol was a senseless tragedy, one that we are still grappling with,” Schumer said. “It has left deep scars here in this building (and) among his friends and his colleagues.” 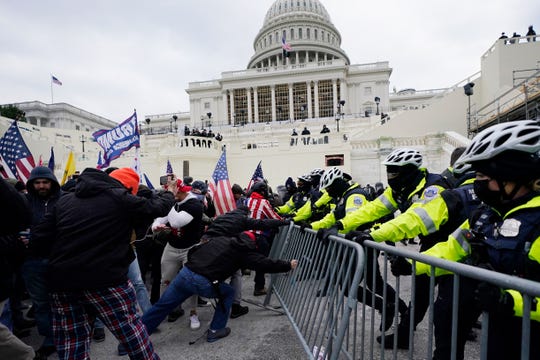 Sicknick was one of five people who died during the Jan. 6 riot at the Capitol, that also injured at least 140 officers in the Washington, D.C. Police Department and the United States Capitol Police. Two others, Jeffrey Smith of the DC Police and Howard Liebengood of the Capitol Police, died by suicide in the weeks following the attack.

Following the ceremony, silence filled the rotunda as members of the Capitol Police force, National Guard and others approached the urn carrying Sicknick’s remains in groups or individually to pay their respects. Most saluted the fallen officer.

An American flag was placed next to the urn, both sitting in front three wreaths representing the Senate, the House and the Capitol Police.

They both placed their hands over their hearts and put their hands on the small box in the middle of the Rotunda holding Sicknick’s remains.

President Biden and First Lady Jill Biden came to the Capitol Tuesday evening, when his remains had their ceremonial arrival and when Capitol Police officers were invited to view the remains.

They stood with their hands over their hearts, and then Biden reached out to touch the wooden box holding his remains. Biden then said a prayer, made the sign of the cross, and walked over to view the wreaths.