Anderson Cooper ripped into MyPillow CEO Mike Lindell for advocating for the use of oleandrin as an unproven treatment for COVID-19.

In a Right Side Broadcasting interview Monday night, Lindell said he spoke to Bed Bath & Beyond and Kohl’s representatives and that both said they would discontinue selling the pillows.

“Just got off the phone – not five minutes ago. Kohl’s, all these different places. … These guys don’t understand,” Lindell said in the interview. “They were good partners. In fact, I told them, ‘You guys come back anytime you want.’”

Lindell also told Fox 9 that Wayfair and H-E-B have severed ties with the company.

Costco photo departments closing: Costco will soon close photo centers in all of its clubs, but some services will be available online

MyPillow products were still listed on both the Bed Bath & Beyond and Kohl’s websites Tuesday. At Kohl’s, the medium-fill pillow and travel pillow were on sale for buy one, get one 50% off.

Lindell, a staunch supporter of Trump, has continued to share false claims of widespread voter fraud and President Donald Trump’s baseless claims that he was the true winner of an election he lost by more than 4 percentage points.

He was photographed leaving a White House meeting Friday with notes referring to the use of martial law and a potential CIA shakeup. 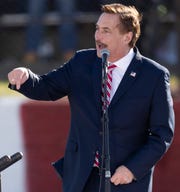 As recently as Thursday, Lindell told supporters on Facebook to “keep the faith” and, “We will have our president Donald Trump 4 more years!”

Dominion Voting Systems threatened to sue Lindell due to his claims that the company’s machines were rigged to change the outcome of the election. This claim has been debunked. “Litigation regarding these issues is imminent,” reads the letter sent to Lindell.

This story will be updated.