Texas Attorney General Ken Paxton on Friday had asked the U.S. District Judge Drew Tipton, a nominee of former President Donald Trump who took the bench in Corpus Christi last June, to block the new policy that pauses most deportations for the next 100 days.

“Texas is the FIRST state in the nation to bring a lawsuit against the Biden Admin,” Paxton, a conservative Republican, wrote on Twitter. “AND WE WON. Within 6 days of Biden’s inauguration, Texas has HALTED his illegal deportation freeze. *This* was a seditious left-wing insurrection. And my team and I stopped it.”

Paxton has said he plans to try to stymie a raft of plans by the new administration. 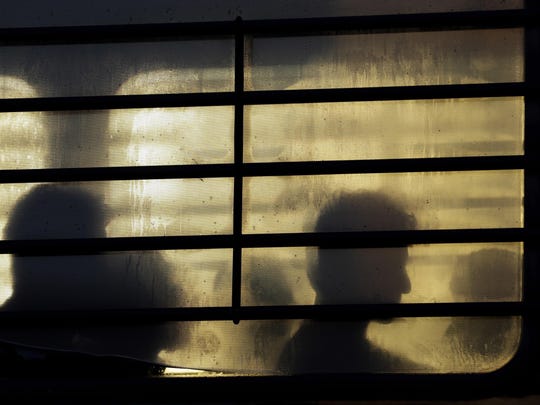 FILE – In this Nov. 16, 2018, file photo, immigrants who entered the United States illegally wait to board a plane for a deportation flight. More than 2,000 unaccompanied children have been expelled since March under an emergency declaration enacted by the Trump administration, which has cited the coronavirus in refusing to provide them protections under federal anti-trafficking and asylum laws. (Photo: AP Photo/David J. Phillip, File)

The policy, which went into effect Friday, was announced by acting Homeland Security Secretary David Pekoske as part of a comprehensive review of immigration enforcement, particularly amid the challenges posed by COVID-19.

The pause, Pekoske said in a memo last week to immigration officials, will let the agency focus resources on its most pressing needs, in particular at the busy southern border “in the midst of the most serious global public health crisis in a century.”

But Paxton had said the pause violates federal law and an agreement between Texas and the Homeland Security Department — signed in the closing days of the Trump administration — that requires federal officials to provide 180 days of notice to Texas before immigration enforcement can be changed.

The deportation freeze also carries a safety risk, he said.

“Our state defends the largest section of the southern border in the nation. Failure to properly enforce the law will directly and immediately endanger our citizens and law enforcement personnel,” Paxton said in a statement announcing his first lawsuit against Biden’s policies.

“This lawsuit should not be allowed to proceed,” said Kate Huddleston, attorney for the ACLU of Texas, said on Tuesday. “Paxton sought to overturn the results of the 2020 presidential election by attempting to baselessly suppress votes; now he is attempting to force the Biden administration to follow Trump’s xenophobic policies. The administration’s pause on deportations is not only lawful but necessary to ensure that families are not separated and people are not returned to danger needlessly while the new administration reviews past actions.”

Pekoske’s memo excluded from the freeze noncitizens who are suspected of terrorism or espionage or are found to pose a security threat. The freeze also doesn’t apply to those who voluntarily waive the right to remain in the United States.

“Nothing in this memorandum prohibits the apprehension or detention of individuals unlawfully in the United States,” he added.

But Tipton said the Biden administration and key federal agencies involved with immigration “do not have discretion to completely disregard” federal code that says “when an alien is ordered removed, the Attorney General shall remove the alien from the United States within a period of 90 days.”

Tipton also called the Biden immigration order arbitrary and capricious, saying it “not only fails to consider potential policies more limited in scope and time, but it also fails to provide any concrete, reasonable justification for a 100-day pause on deportations.”

Biden was in office for only a few hours when Paxton pledged Wednesday to use the court system to challenge the policies of a Democratic president who has vowed to overturn a raft of Trump-era priorities.

“I promise my fellow Texans and Americans that I will fight against the many unconstitutional and illegal actions that the new administration will take, challenge federal overreach that infringes on Texans’ rights, and serve as a major check against the administration’s lawlessness,” Paxton announced.