QAnon has been classified by the FBI as a domestic terror threat, according to an internal memo first published by Yahoo! News.

The QAnon faithful are still pushing conspiratorial lies about the election and amplifying allies of former President Donald Trump even after Facebook and Twitter removed tens of thousands of accounts to stop the spread of violent threats and misinformation.

More than 1,300 QAnon-related accounts have posted on Twitter 81,014 times since President Joe Biden’s inauguration, according to a report from Advance Democracy, a research organization that studies disinformation and extremism.

On Facebook, QAnon terms such as “WWG1WGA” (Where We Go One, We Go All) and “NCSWIC” (Nothing Can Stop What Is Coming) have been shared in hundreds of posts since the inauguration.

Larger accounts spread false claims that Trump won the election and remains in control of the country as a shadow president or that Trump will soon be reinstated, even after some adherents became disillusioned when Biden was sworn into office.

The most active QAnon-related account on Twitter has posted more than 1,800 times since the inauguration, promoting false claims of election fraud, Advance Democracy found.

“There is no doubt that some QAnon adherents have drifted away from the movement after the inauguration of President Biden. This drift, along with the mainstream social media platforms banning QAnon accounts, has made a substantial difference in the volume of QAnon material easily accessible online,” said Daniel Jones, president of Advance Democracy. 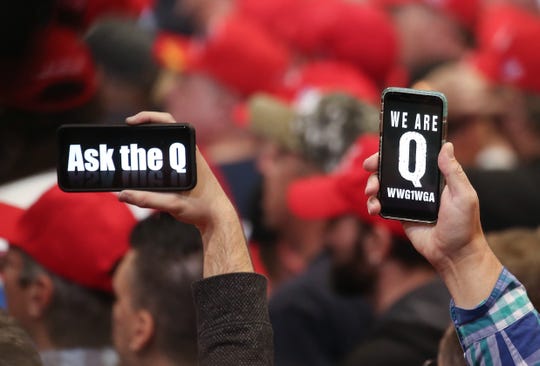 “Nonetheless, we’re still finding QAnon adherents on the mainstream social media platforms,” he said. “And these QAnon accounts continue to promote violence and election-related conspiracy theories that call into question the legitimacy of Biden’s presidency.”

Mainstream social media platforms cracked down on accounts linked to QAnon after the mob attack on the U.S. Capitol. QAnon followers believe that Trump is a messianic figure battling a “deep state” of devil-worshipping, child-molesting Democrats. 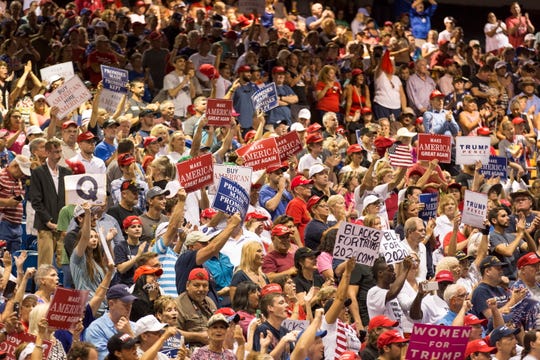 Among a crowd cheering as President Donald Trump speaks July 31 at the Florida State Fairgrounds Expo Hall in Tampa is a sign showing the letter Q, which could stand for QAnon, a conspiracy theory. (Photo: Rod Millington, EPA-EFE)

Those forced out of Facebook and Twitter have joined QAnon channels on alternative platforms such as Gab and Telegram and or have flocked to QAnon websites.

An account with 206,200 followers this week pushed a baseless theory that the “Great Awakening,” when Trump declares martial law and brings his political enemies to justice, is happening “at multiple levels.”

An account with 107,600 followers shared a post that said, “Why should we think this wasn’t factored into the strategy?”

Save the Children? QAnon fabricates pedophile claims against Joe Biden as election looms

QAnon uses COVID-19, election to radicalize: How QAnon and other dark forces are radicalizing Americans as the pandemic rages