The timeline breaks down the riot that took place at the U.S. Capitol, when a Pro-Trump mob stormed the building, sending members of Congress running.

As armed supporters of President Donald Trump prepare to converge on state capitals and Washington, D.C., this weekend and Inauguration Day, some legal experts are calling on authorities to enforce longstanding laws outlawing organized groups that act as citizen-run, unauthorized militias.

Federal law, constitutions in every state, and criminal statutes in 29 states outlaw groups that engage in activities reserved for state agencies, including acting as law enforcement, training and drilling together, engaging in crowd control, and making shows of force as armed groups at public gatherings.

Yet hundreds of armed groups, organized under the insignia of the Oath Keepers, the Three Percenters and others, do exactly that.

These groups have seen their popularity surge since the election of President Barack Obama in 2008. Over the past four years, most have pledged their allegiance to Trump. And some of the groups are planning to come out in force in the days leading up to Joe Biden’s inauguration.

“It’s clearly time to dust off these tools,” said Mary McCord, legal director at the Institute for Constitutional Advocacy and Protection at Georgetown University in Washington, D.C.

Attack on the Capitol: How the antifa conspiracy theory traveled from the fringe to the floor of Congress

Blow by blow: How police failures let a violent insurrection into the Capitol

An Oath Keepers banner in a stylized version of an Army Ranger insignia is seen among the flags of thousands of Trump supporters gathered on the National Mall to hear Donald Trump speak against the 2020 election results just hours before protesters stormed the Capitol Building during Congress meeting to certify electoral votes confirming Joe Biden as president on Jan. 6, 2021. (Photo: Hannah Gaber, USA TODAY)

People affiliated with such groups, including the leader of the largest, the Oath Keepers, were present during last week’s mob attack on the U.S. Capitol.

Armed groups of men identifying as Oath Keepers, Three Percenters and similar groups were present at violent protests at state capitals in recent months, including those who provided what they called security at rallies against COVID-19 lockdowns in Michigan, Trump rallies and events organized by far-right extremist groups.

The groups have shown up to counterprotests against police brutality, often claiming they were protecting private property from vandals and looters. Sometimes they are small, ragtag groups of men – they’re almost always men – bearing rifles and assorted insignia, with no clear affiliation. Other times, the armed men could be mistaken for National Guard or other troops, wearing fatigues and tactical vests and carrying assault rifles.

Even the term that describes such groups, the “militia movement,” is misleading. Militias are groups of citizens called upon to aid their country in times of war or emergency. These groups have no legal authority whatsoever, and some are strongly anti-government.

Now, as Trump prepares to leave office, federal authorities warn that armed protesters plan to descend on Washington and state capitals in an unprecedented show of force.

An FBI memo this week warned of armed protests planned nationwide. Capitol Police warned Congress on Monday that armed protesters could try to surround the Capitol, White House and Supreme Court, according to reports. 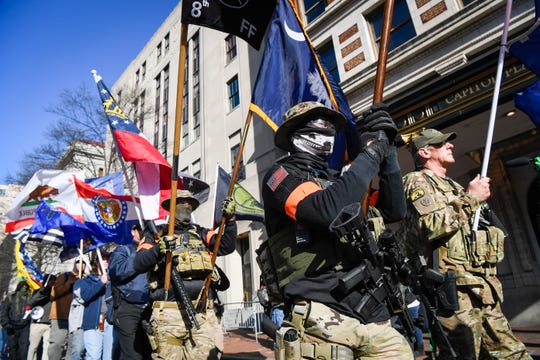 If recent history is a guide, some of the armed pro-Trump protesters will sport insignia of these groups. Many of the armed protesters who have attended rallies and attempted to surround government buildings around the country cut their teeth in the militia movement, communicating with, training with and feeding off the ideas of fellow members.

Yet groups like these are illegal in all 50 states. All 50 state constitutions forbid the existence of private groups that act in public like authorized security forces but aren’t under the control of the governor, McCord said. She was the acting assistant attorney general for national security at the U.S. Department of Justice from 2016 to 2017 and spent nearly 20 years at the U.S. Attorney’s Office for the District of Columbia.

In addition, 29 states have criminal statutes outlawing private militias, she said. The laws have been tested in the Supreme Court dating back to 1886, McCord said, and they are important weapons in law enforcement’s arsenal as states face armed protests that are unprecedented in modern times.

“It would behoove state law enforcement to look at where these groups are,” McCord said, “and try to use the rules they have in their states to either shut them down criminally, or take some civil enforcement actions before the upcoming events.”

The laws rarely have been used, McCord acknowledged – perhaps because state lawmakers and law enforcement aren’t aware of them or because they believe the laws violate the First or Second Amendment. McCord says they don’t.

In one notable case after the 2017 far-right protests in Charlottesville, Virginia, Georgetown Law School’s Institute for Constitutional Advocacy and Protection sued in state court to prohibit private militia groups from returning to the city. The defendants eventually settled, agreeing not to return to the city to engage in organized, paramilitary activity.

At the very least, McCord said, law enforcement agencies could notify these groups that their very existence is illegal. Many groups may not know they’re violating the law, and simply communicating with them could defuse a forthcoming problem, she said.

A rising movement, a mishmash of ideals

Other domestic extremist groups have formed around specific ideologies, such as white supremacy or conspiracy theories like QAnon. But the driving philosophy of the militia movement has morphed over time, said Mark Pitcavage  a senior research fellow at the Anti-Defamation League’s Center on Extremism.

Though such groups have historically been united in their animosity for the federal government, that has blurred under Trump. Some groups have directed their hatred toward immigrants or Muslims. Others have embraced calls for a civil war. 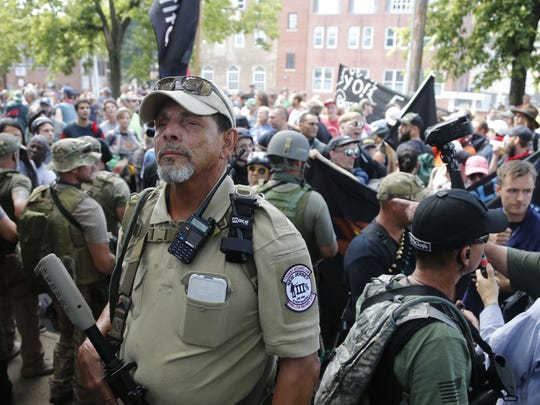 What continues to unite these groups, however, is a love of guns. The boost in their recruitment in 2008 was driven by the fear that Obama would institute harsh federal gun laws. These groups swelled throughout the Obama presidency, Pitcavage and others said.

“With Obama, they could say, ‘He’s definitely going to steal your guns,’” Pitcavage said.

When Trump took office, the militia movement found the White House occupied not by a bogeyman but an ally. Their support for Trump grew as his rhetoric became more combative and conspiratorial. During the presidential campaign, unauthorized militia groups in several cities acted as de facto security forces at pro-Trump events.

Now, the movement faces the ouster of its champion, soon to be replaced by a Democratic president who has promised to make domestic extremism – and possibly gun control – a focus of his presidency. Meanwhile, Trump continues to stoke the conspiracies that many extremist, pro-gun groups are so heavily invested in.

“They could use a Biden presidency as a way to have another resurgence,” Pitcavage said. 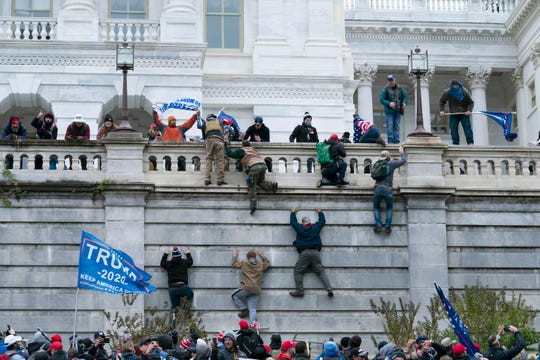 Anti-militia laws and the US Constitution

There’s some question over whether centuries-old state constitutions and criminal statutes outlawing these groups clash with the U.S. Constitution, specifically the First and Second amendments.

McCord points to a Supreme Court case from 2008, District of Columbia v. Heller, in which conservative Supreme Court Justice Antonin Scalia upheld an individual’s right to bear arms for self-defense but said nothing in the case prevented a state from banning paramilitary organizations.

“Although these laws could be clumsily deployed in ways that would raise constitutional problems,” he wrote, “that hardly means they shouldn’t be part of the arsenal that law enforcement uses to prevent the forthcoming protests from turning into deadly riots.” 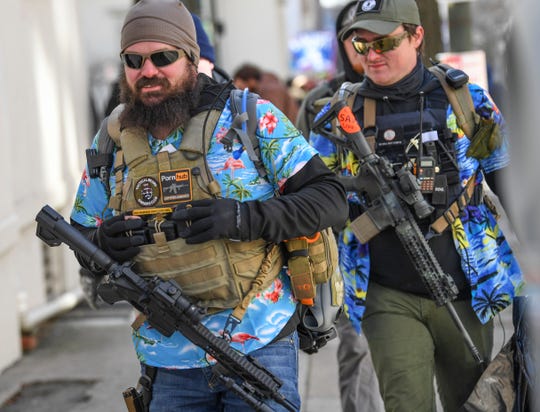 Erwin Chemerinsky, dean of the University of California, Berkeley School of Law, concurred.

“I believe such laws are constitutional so long as they carefully define what is a militia and what conduct is prohibited,” Chemerinsky wrote in an email. “The government, consistent with the First Amendment, can make it a crime for a person to actively affiliate with an organization, knowing of its illegal objectives, and with the intent to further those objectives.”

USA TODAY asked attorneys general in six states, where armed, pro-gun groups have been active in the past few years, whether such laws could be used in the coming days.

“We are working with federal, state and local law enforcement authorities to investigate and prosecute wherever necessary,” said a spokesman for Georgia Attorney General Chris Carr, a Republican.

Officials in Ohio, Arizona and Oregon didn’t respond. A spokeswoman for Bob Ferguson, the Democratic attorney general in Washington, said it’s up to law enforcement agencies to make those decisions.

When is a group of men with guns an unauthorized militia? 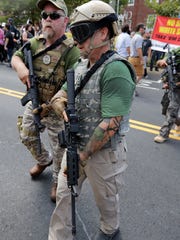 Far-right, pro-gun groups have long argued they aren’t militias or paramilitary organizations but just groups of friends who get together to shoot guns, said Sam Jackson, an assistant professor at the College of Emergency Preparedness, Homeland Security and Cybersecurity at the State University of New York in Albany.

Indeed, groups like the Oath Keepers (which was founded by a graduate of Yale Law School) are quick to correct anybody who calls them a militia. Smaller groups have wised up to the M-word in recent years, trying to cast themselves as shooting clubs or political organizations rather than anti-government extremist groups.

As such, Jackson said, the challenge for law enforcement agencies is to prove, in each case, that a group is organized to the point that it meets a state’s legal definition of a “private militia” and that its actions violate the law.

And that’s assuming law enforcement even has the appetite to confront such groups, Jackson said. In rural, conservative parts of the country, sheriffs and prosecutors openly support or are even members of unauthorized militia groups, which makes prosecution unlikely.

“I’m not the most optimistic about these laws being used, especially before there is some sort of violent crime that is committed,” Jackson said. “If they’re not enforced, then they’re symbolic.”