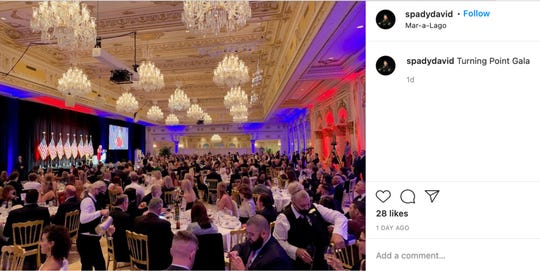 From GOP leaders to congressional lawmakers to donors to prospective political heir apparents, a steady stream of callers and wooers has descended on the Palm Beach club in the past few weeks. All seek Trump’s blessing and support – and money.

The question of how much clout Trump would retain after leaving office, and how he would wield it, has been answered. In less than two months, Trump has established himself as the GOP’s king- and queenmaker – drawing some of the Republican Party’s top influencers.

“The majority of the party is with him,” said Miami-based GOP strategist and podcast host Gianno Caldwell. “It’s unquestionable at this point that they are absolutely with him.”

More: Trump, DeSantis favored for president in 2024 by CPAC attendees

Although Trump’s banishment from social media has left him unable to broadcast and boast online about his new role, news reports and posts to social media by others have confirmed Trump is holding court at Mar-a-Lago. Unlike Trump’s hotel in Washington, which is open to the public, Mar-a-Lago is a private club, and only those hand-selected by Trump are allowed in.

Mar-a-Lago has become a lucrative destination for fundraising

The Republican Party struggles with how it will handle Trump’s efforts to remain a player in politics as GOP strategists plan efforts to retake Congress  and deepen the party’s grip on state capitals.

Mar-a-Lago is a lucrative fundraising destination – for both GOP organizations and Trump. Since 2018, the Republican National Committee has spent more than $290,000 at Mar-a-Lago events that helped the party raise millions.

The RNC will spend even more in April when it hosts its annual spring retreat dinner for major donors at the former president’s club, according to The Washington Post.

The RNC decided to hold the dinner at the former president’s private club to accommodate Trump, the headline speaker, and guests who would like to visit the club, according to the Post.

The RNC’s apparent effort to steer Trump toward détente by moving its dinner to Mar-a-Lago and inviting Trump to speak did not work.

Video: A look back at President Donald Trump and first lady Melania Trump’s holiday visits to Mar-a-Lago in Palm Beach.

The three GOP groups are the largest fundraising organizations focused on electing Republicans to state and national offices.

Trump: Donate to his movement, not the GOP

On March 9, Trump’s Save America PAC sent out a statement saying that although Trump “fully” supports the Republican Party, he would “not support RINOs (Republicans in name only) and fools, and it is not their right to use my likeness or image to raise funds.”

The statement called on the Trump base to “donate to our Save America PAC” to help “the America First movement.”

The RNC denied Trump’s cease-and-desist demand but agreed not to use his name or image to raise money without his permission, though the committee sent out an email last Wednesday inviting donors to contribute to the party for a chance to meet the president at the spring retreat in April.

Caldwell said that despite the support for Trump among party leaders, donors and elected officials, there is widespread evidence of fault lines within the conservative movement.

“The party is fractured, so it’s going to be very difficult to unite the party in a way which is cohesive for legitimate forward movement,” said Caldwell, host of the Outloud With Gianno Caldwell podcast on iHeartRadio.

Caldwell said that split was clear at Trump’s highly anticipated return to the political stage at the Conservative Political Action Conference in Orlando late last month.Caldwell noted that although a straw poll found 97% approval for Trump’s performance as president, 55% said they would support him 2024 if he were to run again.

Caldwell said many conservatives applauded his public policies and straight talk during his term at the White House, but others cringed at his statements, concluding that they “were despicable and something a president should never say.” And many, at least privately, hold Trump responsible for the riot at the Capitol on Jan. 6, Caldwell said.

Whether they are with him or not, Caldwell said, many conservatives feel they have targets on their backs.

“It is a tough, tough road considering where the country is now,” Caldwell said, citing media coverage and social media bans. “Because conservatives are legitimately getting beat up everywhere. This is a really, really rough place to be because there is also a lack of leadership in the GOP right now.”

“The Republican Party is being eaten alive from within by this,” said Spencer Critchley, a Democratic communication consultant who advised Barack Obama’s presidential campaign. “He is doing all this stuff that only serves his own impulsive interest of the moment and the Republican Party seems helpless to do anything but go along with it, even though he is attacking one of the things they presumably care most about, their ability to raise money.”

A top fundraiser for Trump and Republicans said Trump is the undisputable leader of the party and the clear choice among most for the presidential nomination in three years. 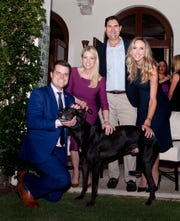 “You can’t underestimate he is the de facto ideological leader of the party,” said Blair Brandt, a political consultant in Palm Beach and former Florida co-chair of the Trump Victory Finance Committee. “He is the presumptive front-runner for 2024 at this time.”

If Trump does not run again, he will probably handpick the party’s next presidential candidate, Brandt said.

“I think that everyone who is doing this now is smart because this is like down time for him,” Brandt said. “There will come a time when his availability will shrink.”

House Minority Leader Kevin McCarthy, R-Calif.,  was the first lawmaker to make the pilgrimage to Mar-a-Lago – eight days after the presidential inauguration of Joe Biden on Jan. 20.

A statement issued by Trump’s Save America PAC said the men discussed strategy for winning the majority of House seats in next year’s midterm elections.

A parade of other GOP politicians followed. On Feb. 16, House Minority Whip Steve Scalise, R-La., stopped by, according to Politico Playbook. Scalise, a longtime Trump supporter did not join other top Republicans, including McCarthy, in rebuking the former president after the attack on the U.S. Capitol.

Reps. Matt Gaetz of Florida and Lauren Boebert of Colorado were at Mar-a-Lago on Feb. 20 for a $10,600-per-couple fundraiser for Utah Sen. Mike Lee, according to a photo of the invite tweeted by Politico reporter Marc Caputo.

Also that weekend, Sen. Lindsey Graham, R-S.C., was at Mar-a-Lago. Like McCarthy, Graham had been critical of Trump after the Capitol attack. Graham did not say whether he raised the incident with Trump during their discussion  of the 2022 elections and efforts to unite the Republican Party, according to a report by The Hill.

At the fabulous Mar a Lago Club.

The following weekend, Richard Grenell, Trump’s former acting national intelligence director, had dinner with Trump on the terrace at Mar-a-Lago.

Beautiful day in Mar-a-Lago with my favorite President. Headed to @CPAC next. Can’t wait to see everyone! #CPAC2021#Trumppic.twitter.com/L7e4WcsGyn

Some visits do not ‘go well’

Former U.S. Sen. David Perdue, the Georgia Republican who lost a runoff election Jan. 5, called on Mar-a-Lago in late February and announced afterward that he would not run again in 2022.

The meeting “did not go well,” according to a tweet by New York Times reporter Maggie Haberman based on unnamed sources.

“Perdue had dinner with and played a long round of golf with Trump last week. It did not go well. Two ppl briefed on the meetings said Trump was very focused on McConnell and Kemp and retribution. One person close to Perdue says that wasn’t related to his decision,” Haberman’s tweet read, which referred to Senate Minority Leader Mitch McConnell and Georgia Gov. Brian Kemp.

Perdue had dinner with and played a long round of golf with Trump last week. It did not go well. Two ppl briefed on the meetings said Trump was very focused on McConnell and Kemp and retribution. One person close to Perdue says that wasn’t related to his decision.

Perdue cited personal reasons for not pursuing the seat.

Trump has endorsed a handful of Republicans in the 2022 election: Sarah Sanders, his former press secretary, for governor of Arkansas; Jerry Moran of Kansas for U.S. Senate; incumbent Tim Scott of South Carolina for  Senate; and Max Miller of Ohio for the U.S. House.

“There’s no question that he’s picking winners and losers and not just for his own ego,” Brandt said. “It’s actually politically effective right now.”

The fundraising and treks to Mar-a-Lago will continue, Brandt said. It makes sense to be seen with Trump and host events at his club. Other GOP donors with deep pockets live in Palm Beach, and “everyone needs a winter vacation,” Brandt said.

“If Trump was living in Macon, Georgia, you would be going there to see him, but here, people are not just meeting with him but also donors who typically participate at the six-figure level and above,” Brandt said.

This month, Donald Trump Jr. and girlfriend Kimberly Guilfoyle hosted a fundraiser for South Dakota Republican Gov. Kristi Noem at Mar-a-Lago, per an invite obtained by Daniel Lippman for Politico.

Trump may also be wielding Mar-a-Lago as a form of payback.

In mid-February, Trump snubbed a request from Nikki Haley, former U.S. ambassador to the United Nations, to meet with him at Mar-a-Lago, according to Politico Playbook. Haley, a potential presidential hopeful and former governor of South Carolina, was critical of Trump after the Capitol riot. 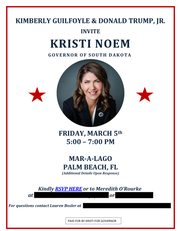 Trump also did not bother with an invitation to McConnell, who also blasted Trump after the attack on the Capitol. Trump vowed retribution.

“While other people say he’s toxic or responsible for the riots, smart people are realizing that this person is in control of the vast majority of the party,” Brandt said.

There was a brief moment after the riot when it looked like the power might tilt in favor of the never-Trumpers in the party, Brandt said, but that didn’t happen.

“The working-class voters are really the base right now and they are still waving Trump flags,” Brandt said.