Donald Trump, the 45th President of the United States, left the White House for the final time on January 20, 2021.

Donald Trump eschewed most of the traditional roles a president fills for the inauguration of his successor, except one: He left a letter for President Joe Biden.

White House spokesman Judd Deere confirmed Wednesday before Biden took the oath that Trump left a note for his successor. Presidents usually leave a note of congratulations and support behind in the Oval Office, but some had questioned whether Trump would do so given his hesitancy to even acknowledge Biden’s victory.

The White House did not release contents of Trump’s note: “It’s a letter between 45 and 46,” Deere said.

Later on Wednesday, Biden confirmed he received the letter, telling reporters from the Oval Office that the note was “very generous.”

“The president wrote a very generous letter,” Biden said. “Because it was private, I won’t talk about it until I talk to him. But it was generous.” 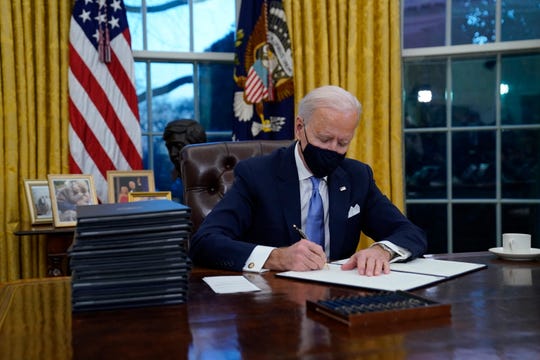 In the past, presidents have used the notes to underscore the significance of the job, and the rewards, hardships and loneliness that sometimes comes with it. Those notes have also generally put aside the partisanship of the election and offered support for a successful presidency.

President George W. Bush’s note to President Barack Obama, left inside the Resolute Desk in the Oval Office, warned Obama that there would be “trying moments,” that his critics would “rage,” that his “‘friends’ will disappoint.” But, Bush wrote, “you will have an Almighty God to comfort you, a family who loves you, and a country that is pulling for you, including me. “

Obama followed the tradition in 2017, reminding Trump in a note that presidents are “just temporary” occupants of the West Wing.

“That makes us guardians of those democratic institutions and traditions – like rule of law, separation of powers, equal protection and civil liberties – that our forebears fought and bled for,” Obama wrote. “Regardless of the push and pull of daily politics, it’s up to us to leave those instruments of our democracy at least as strong as we found them.”

President George H.W. Bush wrote to President Bill Clinton in 1993, saying he “never felt the loneliness some Presidents have described.”

“There will be tough times, made even more difficult by criticism you may not think is fair,” he wrote, according to the letter posted on Hillary Clinton’s Instagram. “I’m not a very good one to give advice; but just don’t let the critics discourage you or push you off course.”

Clinton also left a note for President George W. Bush in 2001, according to ABC News.

“From this day you are President of all of us,” he wrote. “I salute you and wish you success and much happiness.”